Indiana Highway Renamed in Honor of the USS Indianapolis

As a mesothelioma lawyer, I have represented many veterans who served on Navy ships or who built and overhauled these ships.  I have come to have a deep appreciation for both those who served our country and for these amazing vessels.  My clients were exposed to asbestos that was used heavily on Navy ships, especially those built during World War II.  I have learned much about these naval vessels and know that many hold a great place in US history.  The USS Indianapolis, CA-35 is one of those naval ships that played a critical role in WW II, but met a disastrous fate.  I was pleased to see that on August 16, 2011 the state of Indiana officially renamed one of its major highways to honor this great ship. 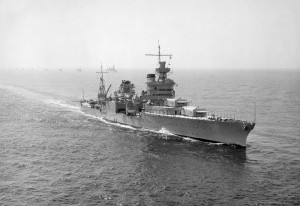 The USS Indianapolis holds a great, and tragic, place in naval history.  She was commissioned in 1932 and was awarded numerous Battle Stars for her outstanding service in World War II.  Just as World War II was coming to an end, the USS Indianapolis was called upon to perform the special mission of delivering parts and uranium for the first atomic bomb, nicknamed “Little Boy.”  This was the atomic bomb that was later dropped on Hiroshima.  She departed San Francisco on July 16, 1945, and ten days later arrived at Tinian Island.  After the mission had been completed, the cruiser was then ordered to Leyte Bay in the Philippine Sea to prepare for the invasion of Japan.  The USS Indianapolis departed from Guam on July 28, 1945.  Two days later, on July 30, 1945, she was hit by two torpedoes fired from a Japanese submarine.  Of the 1,196 crew members aboard, almost 600 crewmen perished as they floated in the shark- infested waters for four days.  Only 316 men survived the horrific ordeal.

Asbestos Use on Navy Cruisers

Crewmen who served on the USS Indianapolis were also exposed to the asbestos insulation on a daily basis as they maintained, repaired and operated the ship’s machinery and equipment that was covered in asbestos.  Millions of hazardous asbestos fibers were released into the air and would be breathed in by crewmen every time the asbestos insulation was installed or removed to make repairs.  Ship vibrations as well as vibrations from gun fire would cause these deadly fibers to also become airborne.

I have had the honor to represent hundreds of Navy veterans and shipyard workers who worked and served aboard Navy cruisers and other Navy vessels.  These workers and seamen all contracted mesothelioma due to their extensive exposure to asbestos.  If you served or worked with the Navy and believe you may have been exposed to asbestos be sure to discuss this with your doctor.  It is important to go for regular exams and screenings.  Early diagnosis of this devastating disease can lead to a longer and better quality of life.