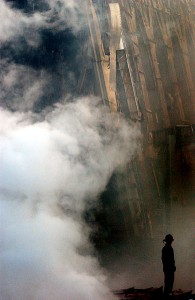 For most of us, September 11, 2001 is a day we can still remember as clearly as yesterday.  It was a tragic event that cost the lives of many, and it will surely be remembered as a defining moment in our history.

I have the utmost respect and admiration for the New York City firefighters who were some of the first emergency workers on the scene at Ground Zero and were the last to retreat.  The New York City firefighters were among the few who were rushing toward the wreckage while everyone else fled the area.  There were many dangers that our firefighters faced on September 11, 2001 and in the days to follow.  However, it was evident that their commitment to save lives was paramount.  In the years to follow, however, many of our brave men and women have suffered illnesses that researches believe are attributable to the environment at Ground Zero.

A recent study in the Lancet journal has shown that firefighters who worked at Ground Zero are more likely to develop cancer than their counterparts who did not spend time in lower Manhattan.

The study was based on nearly 10,000 New York City firefighters.  After the 9/11 attacks, the New York City Fire Department had set up additional health monitoring programs.  Because of these programs and the common insurance through their jobs, the health records were able to be tracked and studied.

Researchers have found that prostate cancer, melanoma, and colon cancer were some of the most common cancers found among the brave firefighters who worked at Ground Zero.  Other cancers of the lung, stomach, pancreas, bladder, kidney and blood were also reported among the group.

Researchers believe there are many contributing factors for the increased risk of cancer in these firefighters.  The dust in the area could have contained cement, glass fibers, and lead among other things.  In addition, toxic fumes from burning jet fuel and other chemicals may have also been in the air.

Asbestos was another deadly substance found at Ground Zero.  Diseases such as asbestosis, lung cancer, and mesothelioma are some conditions caused by asbestos.  Although many different cancers have been identified in the first seven years following the attacks of 9/11, cancers caused by asbestos, such as mesothelioma, can take years to develop.

Symptoms of mesothelioma, such as shortness of breath, coughing, and pain in the abdomen, can appear 20 to 50 years after exposure to asbestos.  As a result, it is highly important that we continue our efforts to monitor and care for the men and women who risked so much to save so many.