39 People Die in Hawaii from Asbestos Every Year

39 People Die in Hawaii from Asbestos Every Year

Asbestos Nation, part of the Environmental Working Group’s Action Fund, has found that 589 people died in Hawaii due to asbestos-related illnesses between the years of 1999-2013, an average rate of 39 deaths annually, in a study of asbestos deaths in all fifty states.

These figures include estimates of the number of deaths from lung cancer caused by asbestos exposure. Analysis in a study published in 2012 by scientists at the International Agency for Research on Cancer, part of the United Nations’ World Heath Organization, suggests that there are 3.2 to 4 lung cancer deaths in the U.S. for every mesothelioma death among individuals exposed to asbestos. More information about the EWG statistical methods are available here. 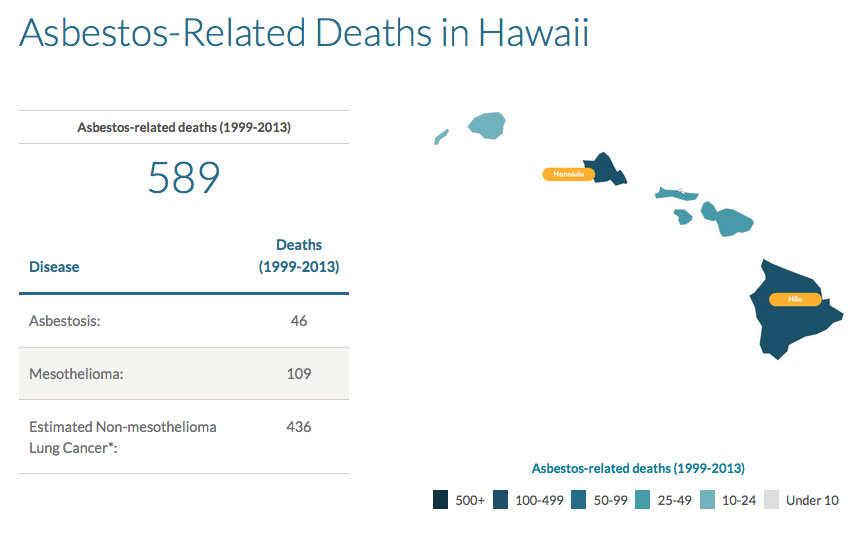 The widespread belief that asbestos is a problem of the past is a dangerous myth, and common misconceptions about asbestos today are no accident. Corporate interests spend millions upon millions of dollars to manufacture junk science and disinformation campaigns that claim asbestos does no harm. It is part of a strategy to sway courts in their favor, against victims whose lethal asbestos exposure came from their products.

A recent exposé by The Center for Public Integrity found that Ford has recently spent $40 million to reshape asbestos science “to change the narrative on the risks of asbestos brakes.” Ford is one of many auto manufacturers that had knowledge of the life-threatening dangers of using asbestos in brakes, many years before switching to metal and carbon materials. In Ford’s case, their own unpublished study in 1968 indicated the potential harm, yet they did not phase asbestos out completely from their brakes until the mid-1990s.

With so much investment in covering up the truth, it’s clear that asbestos still causes great harm—and that it is still a major liability for companies that put their workers in harm’s way.

Ford’s fabrications are merely the tip of the iceberg. For more, please read our article about how the Asbestos Industry Suppressed and Altered Medical Research, and tune in to our podcasts on Asbestos & Your Health w/ Cynthia Davis and the criminal way Traveler’s Insurance denied ever selling asbestos products in Hawaii.