There are many nuclear- powered Los Angeles class submarines home ported in my own backyard at Pearl Harbor Naval Shipyard –the USS Bremerton SSN 698, the USS Jacksonville SSN 699, the USS Chicago SSN 721, and a number of others.  So I read with interest a report from Portsmouth Naval Shipyard located in Kittery, Miane, regarding a fire on board one of these submarines.

The Los Angeles-class of nuclear-powered fast attack submarines forms the backbone of the United States submarine fleet.  There are presently 42 on active duty making this class the most numerous nuclear-powered submarine class in the world.  A fire on one of these nuclear submarines is a serious matter. 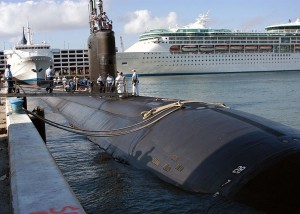 On May 23, 2012 the USS Miami SSN 755 caught fire.  The cause of the fire looks to be a vacuum cleaner on board.  The submarine was in the process of a 20 month overhaul at the Portsmouth Naval Shipyard.  The vacuum cleaner was being used by shipyard workers to clean up at the end of each work day.  Investigators are still unsure what caused the vacuum to catch fire.  The fire caused damage to the torpedo room, the crew’s quarters, and command control.  Luckily the nuclear propulsion plant had already been shut down for the overhaul.

Early estimates put the cost of the damage in the range of $400 million.  The Navy has said they intend to repair this Los Angeles Class Sub instead of starting from scratch on a new boat.  If the Navy goes forward with the repairs on the USS Miami, it will remain in the Portsmouth Naval Shipyard until completed.

Although the nuclear submarines built today are asbestos free, significant amounts of asbestos insulating products were used on submarines from World War II up until the 1980’s, including nuclear submarines.  As a result, thousands of submariners and shipyard workers were exposed to this deadly carcinogen.  While at sea, asbestos insulation, as well as asbestos gaskets and packing, would often be disturbed during on-board repairs and maintenance.  This would release millions of tiny asbestos fibers into the small confined spaces of the submarines. Unfortunately, submariners aboard were exposed to the dangers of asbestos while they ate, slept, relaxed, and worked.

Likewise shipyard workers who constructed, repaired, and maintained submarines were exposed to asbestos products as they carried out their work.  Shipyard workers and submariners who worked on and served aboard U.S. Navy submarines are at risk of developing Mesothelioma and other serious asbestos related diseases.

Through our 33 years of practicing mesothelioma law, we have had the honor to represent hundreds of shipyard workers and U.S. Navy crewmen including those who served and worked aboard submarines.  Sadly, due to the very confined spaces of these boats the crews and shipyard workers had no choice but to inhale the deadly asbestos dust.  The companies who sold these asbestos products were well aware of its deadly potential and yet they continued to sell it without warning to its users.

For over 30 years the Galiher Law Firm has been representing asbestos victims to ensure they receive compensation from these companies.  If you or a loved one worked or served aboard a U.S. Navy submarine, it is important to inform your doctor so your physician can monitor you closely for signs of asbestos-related disease.  If you have an asbestos-related injury as result of your service, please call us so we can help you and your family.