I have represented hundreds of US Navy veterans suffering from mesothelioma throughout my 33 years as a mesothelioma lawyer.  When I read stories of men and women who served our country and who have been diagnosed with terminal mesothelioma, it never ceases to sadden me.  These brave men and women survived the perils of wartime service – whether it was World War II, Korea, Vietnam, or the Cold War.  Yet decades later, they face an enemy they cannot conquer – mesothelioma, a cancer caused by asbestos that they were exposed to during their naval service.

What is so disconcerting and frightening to so many of my mesothelioma clients is the completely unexpected way this disease strikes.  Mesothelioma has an extended latency period so symptoms do not develop until 30 to 40 years after my clients worked around asbestos.  Often US veterans have completed their naval service and gone on to pursue other rewarding careers far removed from any further asbestos exposure.  Then decades later- without warning- they are diagnosed with mesothelioma.  Medical science is still researching the individual factors that result in one person contracting mesothelioma while another who worked right next to him remains disease free.  While the individual variables remain uncertain, one thing is certain – asbestos caused this deadly disease.

Mesothelioma strikes unexpectedly.  It may occur when one has had a long and outstanding naval career or when Navy service is a faint memory.  Admiral Elmo Zumwalt had an exceptional navy career and served as the Chief of Naval Operations for almost 30 years when he was unpredictably diagnosed with mesothelioma.  Others have been diagnosed with mesothelioma decades after they had left naval service. This was the case of a world renowned forensic artist whose navy service ended in the 1960’s.  He had pursued a long career as a forensic sculptor and helped to solve many murder mysteries by identifying murder victims and wanted criminals.  Although this forensic artist spent his life helping to solve the mystery of other people’s death, the cause of his mesothelioma is no mystery.  He and Admiral Zumwalt both served on Navy ships covered with asbestos. 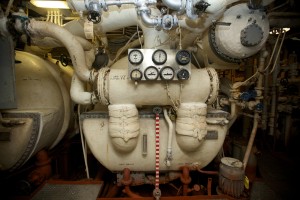 To a US Navy veteran, his ship was his home.  This was where he lived and worked day in and day out. Here he ate, slept, and spent his spare time with his shipmates.  Yet here is where these veterans were exposed to asbestos.  Navy ships were covered with asbestos from stem to stern from the 1930s until the mid 1970s and even into the 1980s.  Every type of Navy ship had asbestos insulation throughout the entire ship, including Navy destroyers, the “work horses” of the fleet.  The Navy’s destroyers faced battles in virtually every theatre of action throughout World War II and their crews earned innumerable honors.  Little did these Navy seamen and officers know that the tons of asbestos that had been used to insulate the equipment and machinery were as dangerous as the enemy they were fighting.  These seamen were exposed to the asbestos dust generated from the asbestos insulation as the ships were operated and repaired.  As a result, all Navy seamen and officers are at a high risk of developing mesothelioma.  Sadly, many have already died from mesothelioma.

Asbestos Use on Navy Ships

Through my work as a mesothelioma lawyer, I have assembled literally millions of pages of documents that show when, where and how asbestos products were used on Navy ships.  Our extensive Navy archival library contains blueprints and other navy records documenting the extensive use of asbestos-containing machinery, valves and piping.  Whether the ship was steam-powered or diesel-driven, there were extensive amounts of asbestos present. 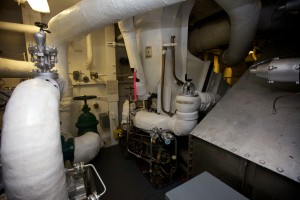 On steam-powered vessels, high-pressure steam operated the main turbines that powered the ship through the water.  These turbines were insulated with asbestos pads, cloth and cement.  In addition, all of the other machinery and equipment that was needed to run the ship was also operated by steam and was insulated with asbestos.  This included feed pumps, forced draft blowers, lubricating systems, fire and bilge pumps, and the like which were driven by their own steam-driven turbines, called auxiliary turbines.  The high-pressure steam lines and all of the turbines and machinery required asbestos insulation to protect the navy seamen from being injured by the hot surfaces.  Insulation was also needed to keep the temperature within the machinery spaces low enough so that the men could work in the engine and boiler rooms. 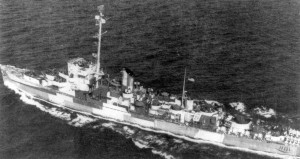 Diesel powered ships also used extensive amount of asbestos.  Diesel-driven destroyers, like those of the Edsall class built during World War II, were powered by large four diesel engines. Significant amounts of asbestos were used to insulate the large sections of piping that comprised the exhaust system of these diesel engines.  There were also hundreds of asbestos gaskets used on these diesels engines and in other piping systems.  Even cold water pipes had asbestos on them.  For anti sweat purposes, asbestos was used on the piping carrying water throughout the fire main system, as well as other cold water systems.

As Navy seaman operated both steam-powered and diesel-driven ships, they were exposed to asbestos dust that became airborne as the engines and other equipment and piping were maintained and repaired.  Navy seamen and officers were unaware of the dangerous nature of the asbestos dust that was all around them.  They certainly did not know that breathing this dust could lead to an asbestos-related cancer.  Yet this deadly cancer has unexpectedly taken the lives of thousands of US veterans over the past three decades and continues to claim the lives of unsuspecting victims.

Mesothelioma and Your Legal Rights

My mesothelioma clients are often angry and confused when they learn that the companies who sold these asbestos products were aware of the deadly nature of asbestos.  It had been known for decades that breathing asbestos dust could cause lung disease and mesothelioma, but the companies that used asbestos in their products failed to warn workers and Navy seamen of these health risks.  I have represented thousands of clients who have contracted asbestos-related diseases in their claims against these companies for their failure to warn of the dangers of asbestos.  Had these seamen been warned, they could have taken the necessary precautions to prevent them from breathing this deadly dust and contracting this devastating cancer.

If you or a loved one has mesothelioma, do not hesitate to call me if you would like to talk about your legal rights and what that means in your situation.  When my clients first meet with me, they have many questions that I am able to answer for them.  I would be pleased to do the same for you and your family.