75 Years Ago, a Landmark for Pearl Harbor Shipyard Workers

75 Years Ago, a Landmark for Pearl Harbor Shipyard Workers 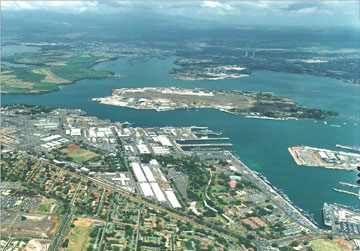 As we remember last month’s 75th anniversary of the historic attack on Pearl Harbor, let’s not forget the Pearl Harbor shipyard workers, whose struggle followed. The heroic efforts of the Pearl Harbor Navy Yard, assisted by tenders and ships’ crewmen, put the following ships back to sea in a little over two months: battleships Pennsylvania, Maryland, and Tennessee; cruisers Honolulu, Helena, and Raleigh; destroyers Helm and Shaw, seaplane tender Curtiss, repair ship Vestal and the floating drydock YFD-2. All were in active duty by mid-1942.

Other members of fleet were damaged to the point of near total loss. These were stripped for serviceable machinery, equipment and especially weapons. The work was vital to America’s national interest, but also dangerous to all involved. During the war years, as well as for many decades that followed, exposure to asbestos could be part of the daily ship repair work. This is why even until the present day, the Pearl Harbor shipyard continues to be the source of exposure for many cases of mesothelioma in Hawaii.