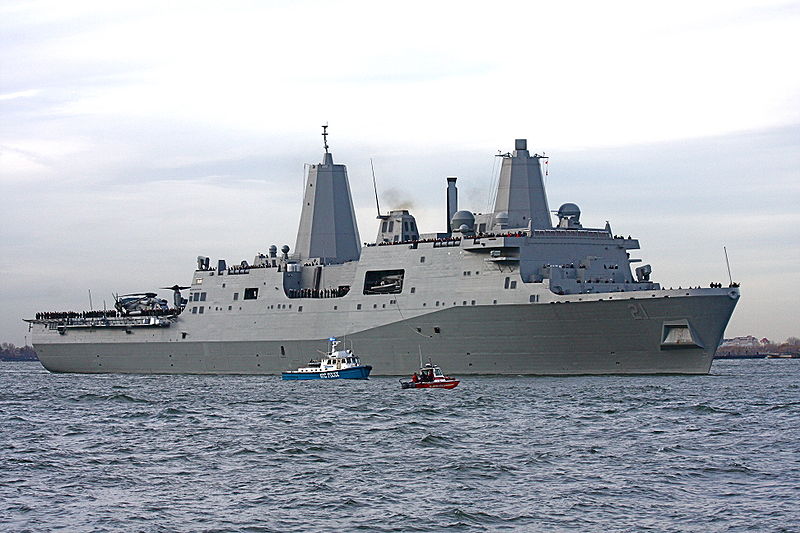 The destruction of the World Trade Centers on September 11, 2001, left behind not only an indelible mark on the hearts and minds of all Americans, but also thousands of tons of construction debris.  But in an act that symbolizes the resiliency of Americans, seven and a half tons of the steel debris from Ground Zero were melted down to make the bow of one of the Navy’s newest ships, the USS New York LPD-21.  This landing platform dock was commissioned last November on the USS Intrepid Sea, Air and Space Museum Pier.

Although State names are ordinarily reserved for submarines, naming the Navy’s new surface ship the USS New York is only fitting.  “This new class of ships will project American power into the far corners of the Earth and support the cause of freedom . . . and will be a fitting tribute to the people of the Empire State,” announced the Secretary of the Navy in September of 2002.  The new ship will honor the victims and heroes of the September 11th attack.

The USS New York made her maiden voyage from New Orleans to New York in October.  Upon her arrival in New York City in early November she paused in front of the World Trade Center site and fired a 21-gun salute to the people of her namesake city and state.

Asbestos Use on Navy Battleships

Among the crowd gathered to celebrate the ship’s commissioning were families of  September 11th victims, first responders to the September 11th attacks, and sailors who had been aboard a former Navy battleship carrying the same name, the USS New York BB-34.  This battleship served in both World Wars and earned three battle stars in World  World II.  Ironically, her keel was laid on September 11, 1911, 90 years to the day the World Trade Centers were attacked.  But there is another connection between the first responders to the World Trade Center disaster and the crew of the battleship USS New York.  Both were exposed to asbestos dust from the  insulation used in the construction of the twin towers and this Navy warship.

World War II vintage battleships contained literally tons of asbestos insulating products.  Asbestos had been used to insulate the machinery and piping throughout every battleship.  The crewmen who served on the  USS New York, including those who attended the commissioning of the Navy’s newest ship, were exposed throughout their service to the asbestos dust generated from this massive amount of asbestos insulation.  Each time this asbestos insulation was disturbed, removed, and replaced during routine operations and maintenance, millions of hazardous asbestos fibers were released into the air.

The World Trade Center attacks on September 11th caused the greatest environmental catastrophe in New York City history.  Over 400 tons of asbestos fibers were used in the construction of the World Trade Center and were released into the air when the towers collapsed.  During the construction that began in 1966, the steel beams were heavily coated with a slurry mix of asbestos and cement sprayed on as fireproofing material.  Although the City of New York banned the use of spray-on asbestos in 1971, hundreds of tons of this cancer-causing product had already become part of these towers.  The first responders who raced to the World Trade Center to help the victims of this tragedy were exposed to the airborne asbestos that was released when the towers collapsed.  Many of the people who escaped the towers and those in the vicinity also experienced bystander exposure to this asbestos dust.

At Risk Because of Past Exposure to Asbestos

As they witnessed the historic commissioning of the Navy’s newest ship honoring the victims of the tragic 9/11 attack, the crewmen of the battleship USS New York and the first responders to the World Trade Center were faced with an insidious danger that binds them again.  Both remain at risk of developing asbestosis, lung cancer, and mesothelioma, a rare and fatal cancer, because of their past asbestos exposure.