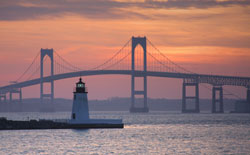 Rhode Island residents were exposed to asbestos in many different ways. Because of its extensive coast line, the Navy developed a facility in Newport and commercial ship repair yards also sprung exposing workers to asbestos products used in the repair of ships. Power plants and other industrial facilities used asbestos insulating products on the high temperature steam lines and equipment in these facilities. In construction projects, asbestos was present as it was used in many applications from insulating materials to construction materials such as wall board joint compound to floor and roof tiles.

Hundreds of Rhode Island residents have died as a result of asbestos exposure over the past 40 years. Because asbestos-related cancers develop decades after exposure, asbestos-related deaths continue to be found among people in Rhode Island. Experts believe that the incidence of mesothelioma will continue to rise for many years before reaching its peak, followed by a gradual decline. Thousands of mesothelioma cases will continue to be diagnosed nationally for many years to come.

Below is a list of occupations that put Rhode Island workers at a known risk of asbestos exposure. If you worked in one of these occupations in the 1980s or earlier, there is a good chance that you were exposed to asbestos:

The following is a list of some of the Rhode Island job sites where there is a documented use of asbestos products. If you or a family member worked at one of these places, you may be at a heightened risk of asbestos disease.

If you believe that you may have been exposed to asbestos at your own job, please contact a mesothelioma attorney for more information. There are many other job sites in Rhode Island where asbestos was used.

In 2009, the US Centers for Disease Control released data showing that Rhode Island had an age-adjusted death rate for mesothelioma of 12.4 deaths per million per year. Other statistics have reported from 1979-2001 there were over 150 mesothelioma cases in Rhode Island.

Galiher DeRobertis & Waxman has worked on behalf of workers from Rhode Island to help them recover compensation for their mesothelioma caused by asbestos exposure. If you have been diagnosed with mesothelioma, and you believe you were exposed to asbestos in Rhode Island, it is important that you contact a skilled attorney with experience in asbestos litigation. In addition, time is of the essence, because you have a limited amount of time to file suit.