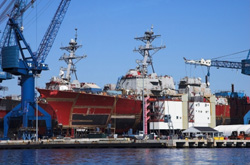 Maine is well known for its proud history of shipbuilding. Bath Iron Works Shipbuilding has been building and modernizing ships in Maine for over a hundred years. Likewise, Portsmouth Naval Shipyard, established in the 1800’s, has been a premier facility building and overhauling the Navy’s submarine fleet. During World War II, shipbuilding was also a major industry in South Portland, Maine where Liberty Ships were produced at record speed for the war effort. Asbestos products were used extensively at all three of these facilities in the construction and repair of both navy and commercial ships and submarines, causing thousands of workers to be exposed. Asbestos cancers, including mesothelioma, have been diagnosed in workers from all of these shipbuilding facilities.

Other industries that once flourished in Maine also utilized asbestos products. While most of the paper and woolen mills in Maine have closed, these mills were once found throughout all of northern Maine. These plants utilized asbestos insulation as did power plants and other manufacturing facilities in Maine. This has resulted in thousands of workers being exposed to asbestos products.

Sadly, the statistics on mesothelioma deaths indicate that Maine has more than twice the average number of cases when compared to other states. In fact, in 2009, the Centers for Disease Control found that Maine had the highest incidence per capita of mesothelioma of any state.

Below is a list of occupations that put Maine workers at a known risk of asbestos exposure. If you worked in one of these occupations in the 1980s or earlier, there is a good chance that you were exposed to asbestos:

The following is a list of some of the Maine job sites where there is a documented use of asbestos products. If you or a family member worked at one of these places, you may be at a heightened risk of asbestos disease.

If you believe that you may have been exposed to asbestos at your own job, please contact a mesothelioma attorney for more information. There are many other job sites in Maine where asbestos was used.

The high levels of asbestos used in Maine’s industries are reflected in the health of Maine workers, who have one of the highest rates of mesothelioma in the country. Mesothelioma is a deadly cancer of the lining of the lungs and abdomen, which is caused by asbestos exposure.

Like other asbestos diseases, mesothelioma has a long latency period. This means that a person usually develops mesothelioma long after the initial exposure to asbestos – usually between 10 and 50 years later. Due to this latency period, the number of Maine mesothelioma deaths continues to rise even though asbestos is seldom used in Maine today.

In 2009, the US Centers for Disease Control released data showing that Maine had the highest death rates per capita from mesothelioma than any other state. Analyzing data collected from 1999-2005, the Centers for Disease Control found that in the United States there were on average 14 deaths per million caused by mesothelioma. But in the State of Maine, that number was nearly doubled at 27 deaths per million deaths from mesothelioma.

Galiher DeRobertis & Waxman has worked on behalf of workers from Maine to help them recover compensation for their mesothelioma caused by asbestos exposure. If you have been diagnosed with mesothelioma, and you believe you were exposed to asbestos in Maine, it is important that you contact a skilled attorney with experience in asbestos litigation. In addition, time is of the essence, because you have a limited amount of time to file suit.