History of Asbestos in Hawaii

Home Legal Support In Your State History of Asbestos in Hawaii 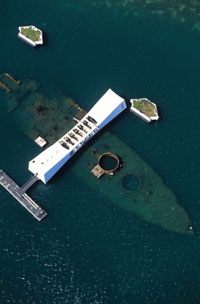 Hawaii is home to one of the United States’ most strategically significant naval installations, Pearl Harbor Naval Shipyard. From World War II to the 1980s, hundreds of navy ships were overhauled and repaired at Pearl Harbor. The machinery and equipment on battleships, destroyers, oilers, and submarines were routinely removed, repaired, and replaced to keep America’s fighting fleet in the Pacific battle-ready.

Tons of asbestos was used on board navy ships up through the 1980s. Asbestos insulation was ideal for use on ships, because it was fireproof, waterproof, and an excellent insulator. Pipes, boilers, valves, turbines, pumps and other equipment were covered with asbestos block insulation, cloth, and pads. Pipe flanges were sealed with asbestos gaskets and valves were sealed with asbestos packing. Both navy seamen and civilian shipyard workers were exposed to excessive amounts of asbestos dust during ship overhauls and repairs at Pearl Harbor Naval Shipyard.

Asbestos was used at numerous other job sites in Hawaii. The Hawaiian Electric Company used asbestos at all of its power generating plants. Sugar mills made extensive use of asbestos to insulate boilers, pipes, and evaporators as sugar cane was processed into raw sugar. Hawaii’s construction industry used asbestos-containing joint compound, wallboard, floor tiles, roofing material, siding, and plaster. Hawaii also has two oil refineries that used large amounts of asbestos insulation. Workers in these industries were exposed to excessive amounts of asbestos dust.

Tragically, many Hawaii workers also brought asbestos home on their clothes without realizing it. These workers and their families are at a heightened risk of mesothelioma.

Below is a list of occupations that put Hawaii workers at a known risk of asbestos exposure. If you worked in one of these occupations in the 1980s or earlier, there is a good chance that you were exposed to asbestos:

The following is a list of some of the Hawaii job sites where there is a documented use of asbestos products. If you or a family member worked at one of these places, you may be at a heightened risk of asbestos disease.

If you believe that you may have been exposed to asbestos at your own job, please contact a mesothelioma attorney for more information. There are many other job sites in Hawaii where asbestos was used.

The high levels of asbestos used in Hawaii, in particular at Pearl Harbor Naval Shipyard, have taken their toll on the health of Hawaii workers, who have contracted the disease mesothelioma. Mesothelioma is a deadly cancer of the lining of the lungs and abdomen, which is caused by asbestos exposure.

Like other asbestos diseases, mesothelioma has a long latency period. This means that a person usually develops mesothelioma long after the initial exposure to asbestos – usually between 10 to 50 years later. Due to this latency period, the number of Hawaii mesothelioma deaths continues to rise even though asbestos is seldom used in Hawaii today.

According to the Centers for Disease Control (CDC), there were 57 mesothelioma deaths in Hawaii from 1999 to 2005.

If you have been diagnosed with mesothelioma, and you believe you were exposed to asbestos in Hawaii, it is important that you contact a skilled attorney with experience in asbestos litigation. In addition, time is of the essence, because you have a limited amount of time to file suit.