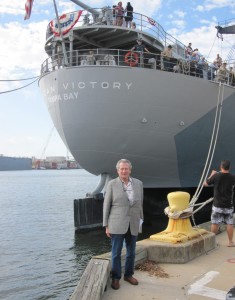 During my long career as a mesothelioma lawyer, I’ve had the opportunity to represent hundreds of Navy veterans and shipyard workers.   This work has given me a profound appreciation for our country’s historic Navy vessels and victory ships.  I am constantly amazed by the craftsmanship and skill of the men and women who designed, built, and maintained these magnificent machines.

A Link to the Past

The trip was described appropriately as a “Relive History Cruise”.  We sailed from her homeport in Tampa, FL into Tampa Bay before returning to dock at the American Victory Ship Mariners Museum.  This was a true opportunity to relive history!  There were re-enactors from the Florida Historical Preservation Group, memorial and prayer ceremonies, World War II airplane flyovers, and a host of other activities which brought the WWII era back to life.

For me, the trip on the SS American Victory was valuable on both a personal and professional level.  Through my 30 years of advocating for Navy clients, I have developed an extensive library of ship drawings and plans.  I’ve also visited numerous museum ships to educate myself about the engineering spaces and equipment on various classes of Navy vessels.  However, there is no substitute for seeing a historic vessel in operation.

The steam boilers and turbines on the SS American Victory were incredible!   There is nothing like the noise, heat, vibration and energy of the steam plant when the ship is underway.   Seeing these systems in action gave me a whole new appreciation for the harsh working conditions the sailors endured on those WWII-era ships.  I also had the chance to observe the ships’ valves and pumps in actual operation, much as they would have looked during the 1940s, 50s, and 60s.   All of this gives me a greater depth of knowledge that I can use to advocate for my clients in Navy and maritime cases.

My cruise on the SS American Victory also served as a reminder of the sacrifices made by the members of her crew, and all the men and women who served on Navy vessels and victory ships.   None of these ships could have accomplished their vital missions without their crews and we should never forget their contributions and sacrifices for us.

Sadly, many of our Navy veterans are still paying the price for their service to this very day.  Asbestos was used widely aboard navy ships and submarines for many years.  Although the dangers and hazards of breathing asbestos is fairly well known today by the general public, such was not the case for the Navy seamen and shipyard workers who built, repaired and maintained these ships many decades ago. Because there is a delay or latency between the time someone is exposed to asbestos and the development of mesothelioma and other lung disease, most seamen were not aware of the dangers of their asbestos exposure.  For more information about the risks to U.S. Navy veterans, visit our website page on Help for Veterans.

Preserving the Past and Protecting the Legacy

Museum ships like the SS American Victory provide me with valuable information and insight that I can use to help my clients obtain the compensation they deserve.  More than that, these museums preserve a priceless historical legacy which belongs to all American.  I encourage everyone to support not only the American Victory Ship Mariners Memorial Museum, but all the historical museum ships located across the country.