Yesterday marked the 69th Anniversary of the attack on Pearl Harbor. There was, of course, the annual Memorial Service at Pearl Harbor and a dedication of a new Arizona Visitors’ Center. But for a day that was proclaimed “to live in infamy,” it seemed to pass with little notice or fanfare. An event that wrought such future havoc on the world and brought about such dramatic changes is for many Americans simply an historical event they have only read about.

The day, though, has very significant meaning to me. 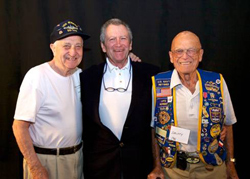 I have had the privilege to get to know some of the survivors of the attack, including the two submariners veterans pictured here with me.

I also have had the honor of representing hundreds of shipyard workers who worked at Pearl Harbor after the attack helping to repair and overhaul the new fleet of ships and submarines that would defend our country. For those workers who contracted mesothelioma from their asbestos exposure at the shipyard, their sacrifice was as great as those who died on this day that will indeed “live in infamy” in my mind